How to Apply Cologne Like a Man, Not an Animal 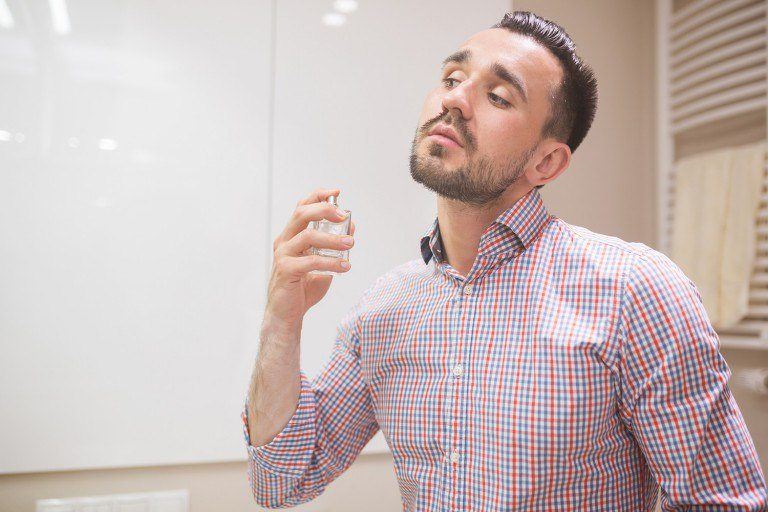 Cologne is animal. There is scientifically something in the stuff that’s attractive to women. But, just as importantly, there’s also the mental side of things; a study cited by Psychology Today several years ago showed that women found men who wore cologne more attractive than men who didn’t.

Yes, of course it may have had at least something to do with the scent, but it also had to do with confidence. A man wearing cologne has a certain swagger, a certain “Yes, here I am, and it’s good,” way about him that women find very appealing. So, why not wear cologne? What have you got to lose, except maybe the attention of the woman of your dreams?

All that aside, however, there’s more to cologne to than simply splashing it on and then proceeding to a female feeding frenzy with you on the menu. Like anything else in the subtle arts of attraction (and looking and feeling good) how to apply cologne takes some know-how. It takes some finesse.

Walk into a room with cologne haphazardly applied to your body and clothes and you might as well toss your chances of romance out the window. As mentioned in a previous post, if your cologne enters the room before you do, then you’ve done something wrong. Drastically wrong. You already have the beard, which is an object of female attraction itself. Cologne can be another weapon in your arsenal, but that doesn’t mean you need to use it like a bazooka.

That’s why were going to take a long look at what it means to “apply” cologne. Not dousing yourself with it, but placing it on with care. It’s like anything else – too much of a great thing can be a bad thing. Let’s do all we can to keep it working for your, not against you.

1. Apply Your Cologne Like A Man, Not An Animal

There’s probably no definitive answer as to how much is too much and how much is not enough when it comes to cologne, but common sense is a helpful guide. For example, if someone has to be physically pretty close to you to comment on how nice your cologne smells, then you haven’t overdone it. If its scent is constantly in your own nostrils, you’ve probably put on too much. Ask your friends or significant other whether it’s too much, not enough, or just right.

A couple of other things to consider: A) Never use cologne as a substitute for soap. Bad hygiene is bad hygiene no matter how you slice it, and not using soap definitely doesn’t land in the “good” hygiene category. B) Wearing too much cologne can cause unwanted physical issues, especially if you’re with someone who is prone to migraines or asthma attacks. Be kind to your fellow human. Go easy, my friend.

We’ve already established that cologne is great, that it can attract wanted attention, and that you should never take a bath in it (or use it instead of soap). Keep a few other things in mind, as well.

You wear different clothing for each season. You know that. But the same applies to cologne; when to wear certain types is dependent on the season. In the summer, you wear lighter clothes, and you’ll also want to use a lighter cologne. The temperature of your body fluctuates, becoming warmer in the spring and summer, and you don’t want to put something heavy on that heat. Save the heartier, heavier scents for the colder months. It may take some testing and trial runs to find the right fit for each season, but it’s worth the effort.

The When Of It

Want to maximize the impact of your cologne? Putting it on at the right time, like immediately after a hot shower when your pores are opened, will help keep you smelling great all day. Putting cologne on when you haven’t showered is, well, a junior high kind of mistake.

Here’s something else to consider: Combining your cologne with heavily-scented soaps, deodorants and body washes is not such a great idea. Their strong fragrances will either cover up the scent of your cologne, or alter the scent of it. Use a fragrance-free soap, body wash, and deodorant, or ones with a light scent. Let your cologne rise to the top, brother.

Finally, another aspect to keep in mind is your skin type. Cologne fragrances tend to cling longer to men with oily skin, while drier skin tends to soak up the scent more rapidly. If you have dry skin, feel free to put on a little extra of your favorite cologne (while repeating our mantra, “I Will Not Bathe In It”).

Now it’s time to get down to brass tacks. That is, here are some techniques which you can use to apply cologne like the sophisticated man that you are. Like everything else, it requires a little skill, and no skill is ever gained without practice. Here are some essential tactics:

You’ll hear “pulse points” mentioned frequently when it comes to cologne. That’s because they’re important, and knowing them will ensure that you don’t waste your cologne by simply spraying it anywhere. What are your pulse points? They’re the areas of your body that give off the most heat, primarily because they have blood vessels nearest to the skin. Specifically, those points are your wrists, neck, and behind your ears. Applying cologne to these areas will help ensure that your scent won’t fade like sunlight on a February afternoon.

One more thing. You should avoid spraying cologne anywhere on your body where you to tend to sweat a lot. Doing so will ensure that your scent will fade quickly. Don’t spray it on your armpits, for instance. Or on your lower back. Leave that up to the animals who don’t know any better.

So, now you have the cologne you like, one which fits the season, is an expression of your inner (and outer) man-ness, and is going to be a powerful partner to that well-groomed beard of yours. The time has come to put it on. Gentlemen, start your engines.

Tip 1 – If you use aftershave, use the same brand of cologne as your aftershave. Layering different scents isn’t a great idea; you end up with scents that don’t flatter each other.

Tip 2 – There’s a school of thought that suggests putting cologne on your clothes is perfectly acceptable, particularly on the top part of your shirt or jacket. The spray can be directed on the collar, with some of the cologne going on your collar, and some on your neck. The neck is considered to be a hot spot for maximizing your cologne’s scent. But be wary about applying cologne to your clothes, because some colognes will leave stains.

Tip 3 – Most cologne can be applied once during the day and retain its scent for the duration. However, there’s nothing wrong with reapplying it again, depending on how well your body’s acidity level reacts to the oils in the cologne.

Tip 4 – We’ve already mentioned pulse points and how they’re potentially prime spots for placing your cologne, but feel free to experiment. Just don’t spray it in on an area where the scent will be hidden.

Tip 5 – Like a lot of things, cologne has a shelf life. The average bottle has a lifespan of 3 to 5 years, so pay close attention to your bottle’s expiration date. Old cologne tends to smell like alcohol after it has passed beyond its effective point. Besides, if you’ve had a bottle that long and haven’t used it up, then maybe it’s not so great in the first place.

Tip 6 – Eating right is just a smart thing to do. So is not smoking. And besides the positive effects on your body, they can have positive effects on your cologne, too. Eating spicy, greasy food while pounding beer will alter your scent – spicy food makes you sweat more than normal, so not a great thing for your cologne – while smoking will also alter the scent. I mean, do you want to smell like a two-pack-a-day kind of guy, or someone a bit more aromatically appealing?

To sum this whole business up, how much cologne – and where – is often a matter of personal preference. Try it on different areas of you body while knowing that some areas may be better than others. Certain scents are better for certain seasons. And always remember, don’t marinate in it. Like a lot of things in life, sometimes less is distinctively more.