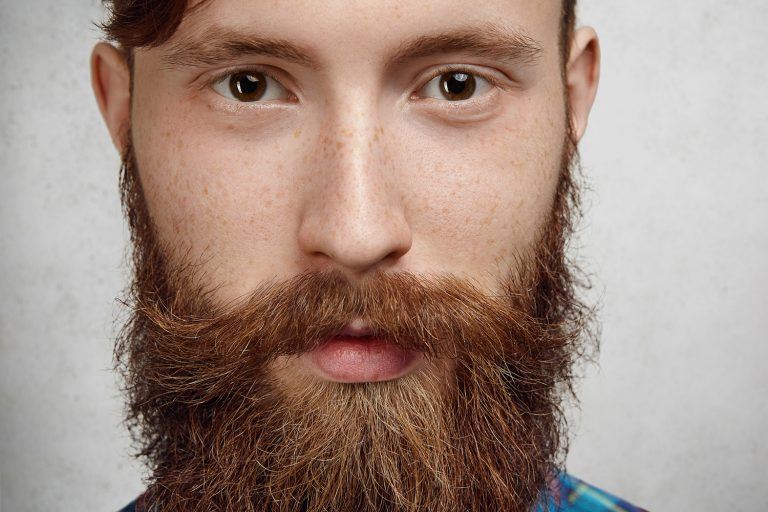 Much has been written and said about the beard and what it means. We already know that it’s a symbol of masculinity and has been for thousands of years.

A beard gives off so many positive vibes. Confidence. Wisdom. Virility. Courage. Strength. Women find beards attractive. And the list goes on.

The bottom line is that nothing quite says “I’m a man” like a beard.

If you’re having trouble growing a beard, or if your beard is not as full and lush as you’d like, it can be frustrating. But take heart, gentlemen. Don’t lose hope.

We’re here to help. We have solutions to help face your frustration head-on and emerge victorious with a beard that will be the envy of others.

So, let’s start – how to grow a thicker beard. OK, let’s digress for just a bit before we get into the how-to of growing a thicker beard and talk about time.

Time is perhaps your closest ally regarding beard growth. So is patience. If you can give your beard time to grow and practice patience, you’ll be amazed at the results.

And it all starts with four weeks.

If you can give us four weeks – less than 30 days, fellas – we’ll help you grow a thicker beard. It comes down to this:

You have to let your beard grow for a least four weeks before you can truly evaluate its status.

Never, ever, give up on your beard after a couple of weeks simply because it looks patchy, scraggly, or like another adjective you prefer. Impatience claims the lives of too many beards, as does the often-inevitable itchiness that comes in the initial stages of facial hair growth.

Let’s face it, anyone can grow stubble, and it doesn’t take a lot of time to do so. But we’re not talking about stubble in this post – we’re interested in a full-grown beard that gives you the manly, well-groomed look that others admire.

Here’s the other thing: don’t start shaping your beard too soon, either. The chances are that you’ll cut off more than you intended before letting your beard reach a sufficient length that shows it’s real “lines.”

Growing a beard is like achieving a lot of good things in life, whether it’s a killer body or earning an advanced degree, in that it requires a commitment. And it’s not even that long of a commitment when you compare it to other things that require discipline.

Let’s break down the four weeks:

It’s not what you do during the first week of beard growth but what you don’t do. Indeed, it not only feels weird on your face, especially if it’s your first time growing a beard, but it may also look weird. The temptation to scrap the project may become overpowering. But giving waving the white flag at this stage isn’t how you grow a full beard.

What you can do, however, is start applying beard oil. Oil makes your beard look and feel healthier (as well as the skin underneath) and is an important weapon in your fight against beard itch. Beard oil is your friend.

So, hold your ground and don’t touch that razor!

By the second week, you’ll have a better sense of the shape of your beard. It will be thick in many places, patchy in others, but you’ll begin to get a better idea of what beard style best suits your face. Growth is still your priority, however, so resist the urge to trim the edges or “clean it up.”

The second week is also a good time to use a growth supplement if you so desire. We’ll dig deeper into beard supplements a bit later.

Many beards men would argue that the first two weeks of beard growth are the toughest and with good reason. By the third week, that pesky itch will have subsided, and your patch of facial hair is taking the shape of a real beard.

It’s OK at this point to trim the patchy edges, but don’t touch any hairs that you’re planning to keep. You can even brush your beard to start training the hairs to lie a certain way (and a quality beard brush is essential to any beardsman’s grooming kit).

The end of Week 4 is the finish line for this initial stage of beard growth and puts you well on your way to growing a thicker, fuller beard that’s the envy of men and women alike. You’ll also have a clear picture of the final shape of your beard. You can also begin grooming it in earnest. Congrats!

Now that we’ve covered the importance of time, let’s get down to the business of how to grow a fuller beard that will become the thick statement of manliness you’d prefer.

5 Ways How to Grow a Thicker Beard

1. Products: A Little Help From Our Friends Serious beardsmen constantly seek ways to help their beard reach its full potential. They’re open to suggestions and ideas, both natural and human-made when it comes to information on how to grow a full beard. And by human-made, we’re referring to hair growth products.

Never mind that, at least yet, there haven’t been clinical trials done in the U.S. concerning the effectiveness of hair growth supplements – which is why they aren’t approved by the FDA. They are approved for hair growth on the human scalp, however, and many, many, many men have used them with positive results on their beards.

In other words, feel free to try them on your beard if you’re curious (and, of course, want to grow a thicker beard).

When it comes to hair growth products, you have to start with Minoxidil. Also known as Rogaine, it’s the most popular product of its kind available and scores of men have vouched for its effectiveness.

Originally used to treat high blood pressure – and it still is – Minoxidil had an interesting side effect on it early users, namely, it caused hair growth. By 1988, the FDA had approved Minoxidil as a hair-growth product while also allowing it to be marketed under the Rogaine name.

Because it worked so well on scalp hair, men naturally took the next step to see if it would work on their face. And it did, although not in the same way. Specifically, Minoxidil stimulates hair follicles already on your face rather than stimulating new growth as it does on your head.

That, in fact, is the million-dollar question. Scientists still aren’t sure how exactly Minoxidil promotes hair growth, although they do know that it’s a potassium channel opener that stimulates blood circulation in hair follicles. Better blood flow means more hormones and nutrients reach your hair’s roots while stimulating growth.

Minoxidil is different from other hormonal-based hair-loss products in that it works topically to stimulate circulation to hair follicles.

Another possible reason for Minoxidil’s hair-growth powers is that it stimulates the enzyme prostaglandin synthase-1 via the immune system. Scientists have long speculated that hair loss is somehow involved with the immune system.

Your hair cells have three phases of growth: Anagen, Catagen, and Telogen. The phases are repeated, in the order listed, as new hair follicles replace existing ones. Minoxidil prolongs the Anagen phase – which is the phase that promotes hair growth. A shortened Anagen phase is the precursor to hair loss disorders such as Male Pattern Baldness.

Choosing which type of Minoxidil to use on your face (and scalp, for that matter) is important.

Minoxidil/Rogaine form is the most popular version used for hair loss, both for men and women. It’s more expensive than liquid Minoxidil but dries twice as fast.

Wash your face thoroughly before you apply Minoxidil foam and rinse your hands and fingers under cold water to prevent the foam from dissolving before you apply it. How much you use with each application is up to you, but the suggested amount is only enough that would fill half of the container’s cap.

You can use Minoxidil more than once a day but wait 8 to 12 hours between applications.

The liquid is the original form of Minoxidil application and can be applied twice a day. As mentioned, the liquid version is less expensive than foam, but it takes longer to dry.

After washing your face, use the amount of liquid that’s measured out in the dropper that comes with your product. Use the dropper to apply small drops of the liquid on your beard area. Use your fingers to rub the solution into your facial hair gently.

Nothing in this world is perfect, and Minoxidil is no exception. While the chances are good that it will help you grow a thicker beard, there are a few drawbacks:

Some users of the Minoxidil liquid version have experienced dry skin – as well as redness, itching, and irritation – after application.

Well, considering Minoxidil was first used to treat high blood pressure, a lowered blood pressure isn’t a big surprise. But it shouldn’t be used in place of the blood pressure medicine prescribed by your doctor and always be careful that your BP doesn’t dip too low.

Not to worry, because there’s no strong correlation here, but some users have complained about weight gain as a possible side effect. What caused their weight gain is open for debate, however.

No article about Minoxidil and beard growth would be complete without a mention of The Minox Beard Spot on Facebook. It follows the beard-growth journey of Beard Spot founder Basik Ali Coe in a video that chronicles his progress every two weeks until an entire year has passed.

Mr. Coe is an unabashed supporter of Minoxidil. Without it, he says, “I wouldn’t have the beard I have today.”

Rogaine isn’t the only player in the hair-growth game. There is a variety of other products, and it’s worth taking a look (albeit shorter) at them: Vitabeard has a mix of vitamins that boost the growth rate of your hair while also improving its overall quality. To be clear, however, Vitabeard does not generate new facial hair growth but is intended to help with the process.

A key ingredient in Vitabeard is biotin, which plays an important role in the process of growing hair. Some research has shown that biotin is also effective in preventing hair loss, but biotin for beard growth is our focus here.

Vitabeard also includes vitamin C, which increases collagen production (collagen is a structural protein found in skin and other connective tissues) while also helping to repair and prevent split hairs.

And, let’s not forget zinc – another one of Vitabeard’s main ingredients. Zinc is said to help you avoid hair loss, as well.

Does Vitabeard work? Some men swear by it, and there’s no harm in giving it a try. But if you’re already getting all of the above vitamins and nutrients via a healthy diet, then you may not need Vitabeard.

There is no shortage of products that are available on Amazon (from a variety of sources) that are designed to grow facial hair faster and thicker. Do they actually work? Well, that’s debatable, and we’ll leave it up to you to decide.

We’ve discussed the importance of beard oil in other posts, and it’s great for softening your beard, reducing beardruff, and making it more manageable. And that’s all that it’s intended to do – not to necessarily thicken your facial hair or make it grow faster.

The same is true of beard shampoo.

But, if you want to see for yourself whether an oil or shampoo promotes better beard growth, we suggest that you use one that offers a refund if the stuff doesn’t work on your facial hair.

Now let’s delve into the business of how to grow facial hair faster naturally.